Many of you, who have been practising yoga for a little longer will know him- Nataraj- Shiva, as a cosmic dancer. Some of you have certainly practiced it more often as an advanced balance – back-bending Asana, others may know him as a statue from the shelf of a yoga school.

I also have a very special relationship with the figure of Nataraj. My very first teacher gave me the statue at the end of an intense period of common practice. At that time I did not know anything about the meaning and had trouble remembering the most important gods from Hindu mythology anyway.

At that time my teacher only explained to me that Shiva takes on different shapes and the dancing form is one of them. 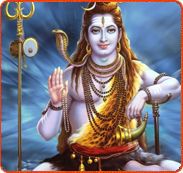 Shiva is one of the three main deities in Hinduism, who, together with Brahma (creation) and Vishnu (keeper), is the destroyer of the famous trinity of the cycle of creation.

Shiva is the most powerful god in the Hindu Pantheon and also the favorite god of many Indians. He is more human than other deities, so that one can identify well with him and all his weaknesses. Shiva also gets angry sometimes and he smokes marijuana… It is not for nothing that you get intoxicated at Shivatri (Shiva’s birthday, usually in February/March) with Bang Lassi, a yogurt drink mixed with cannabis, which is dispensed at all temples all over India in order to penetrate into deeper spheres.

Shiva is also known as Adi Yogi- the first yogi ever. After a long journey, he shared his new insights about Tantra Yoga with his wife Parvati. This was not very interesting to her, but all the more it was Matsiendra, a saint in the form of a fish to listen to the teachings of Shiva. He became Shiva’s first disciple.

Shiva stands for destruction. The term is not necessarily to be understood as negative, but also stands for dissolution. If we carry Shiva in our consciousness, we can resolve the unwanted within us and let go to make room for new things.

When Shiva dances the cosmic dance, he combines all three aspects of “creation-preservation and dissolution” in an energetic form and thus represents the most important aspect in Hinduism and  the clearest form of God.”Nataraj” means king of dance and shiva’s dance is truly the highest energetic form when presenting the rhythm and harmony of life. Life is an infinite cycle!

When our travel group was in Madurai last week during our multi-activity tour through southern India, we also visited the famous Minakshi-Sundareshwara Temple (Parvati Shiva Temple). Within the temple complex, there is a huge column hall and aat the end of it is an impressive Nataraj statue made of stone. On the basis of this statue, our guide explained to us the symbolic meaning of the figure:

If you take a closer look at the figure of the Shiva dancer, you can interpret some symbolic meanings.

Shiva is surrounded by the cosmic and eternally burning fire that creates life again and again and destroys at the same time in rhythmic harmony with the beating drum and dancing movements. He is omnipresent and encapsulates the cosmos in mass, time and space.

The dancing Shiva has four arms. In his upper right hand he holds the Damaru. The drum stands for creation, while the fire in its upper left hand stands for destruction.

The lower right hand shows the Abhaya Mudra, a gesture of protection and he fearlessness, while the lower left hand stands for the spiritual power in each of us.

Shiva’s left foot stands on a lying dwarf, the demon Apasmara, a symbol of embodied ignorance.

Shiva’s long yogi hair within the Wreath of Fire symbolizes the universe, and throughout the chaos, Shiva’s face is relaxed and meditative- the embodiment of pure divine existence. Shiva has three eyes. While the right eye stands for the male solar energy in each of us, the left eye symbolizes the female, cool moon energy. The third eye in the middle, is the eye of wisdom. Here is also the Ajna Chakra located and it is said that in each of us Shiva is manifested here as consciousness.

Shiva is surrounded by the snake Kundalini, the winding energy that lies dormant in each of us and only needs to be activated to be once true Self.

In yoga there are many Asana attitudes and mudras named after Indian gods and saints (Matsiendrasana, Vaschishtasana, Brahma Mudra, Vishnu Mudra etc.), so it is of course not surprising that we also have a Nataraj Asana.

The dancer pose is an advanced balance posture in which we can stand on one leg, geto into the back bend and thus grab the ankle of the other foot with the equilateral hand and then pull it away from us so that our chest area can open even further. The other hand is stretched upwards.

If you do this Asana, you truly feel like a cosmic dancer while you spread out on one leg balancing in space.

Since the Asana is quite advanced, preparatory postures are recommended.

These can be divided into the following groupings:

E.g.: Warrior 1 with crossed arms and deep forebend, Warrior 2 with “hands together from up and down behind the back”, Yin Yoga posture: “Broken wings”

After your peak pose Nataraj asana, you should insert a twist while lying down before relaxing to complete the yoga practice.

And how about a final “Om Nama Shivaya” Japa meditation with a focus on the third eye?